Neil
For some reason writing a blog amuses me. Possibly it is the appeal of writing absolute nonsense and then having it preserved on the internet forever.

Commissar Ioseb Goulashvili scribbled his signature at the bottom of the document.  So far he had successfully purged two thirds of the company and was confident that soon all unreliable elements would be removed from the couple of dozen or so men who were left.  The company commander walked in frowning.  Goulashvili made a note of his defeatist attitude.

"Did you order the bakery set on fire?" asked the company commander.

"I did," replied Goulashvili.  "The soldiers will fight better once they rid themselves of bourgeois notions like breakfast and nutrition.  What do you think about my recommendation to introduce commissars, propaganda officers and reeducation personnel down to section level?"

"That would leave us with only about two actual riflemen per section."

"Perfect, execute one and put the other under surveillance.  Was there anything else?"

"Just several thousand Finns attacking us.  We think they were attracted by the smell of baking bread.  Incidentally you have an interesting name, were you born in Georgia?"


I know I promised Ciao Cina as the next scenario but there was an unexpected delay.  Instead Dave
Wilson and I are going back to where it all began with ASL Scenario #1 Fighting Withdrawal.  Here I shall command such of the 131st Border Battalian as haven't already succumbed to Commissar Goulashvili's attempts at reeducation as they try and fend off a pack of vengeance crazed Finns ably commanded by Dave.  There are no fancy frills like tanks or artillery pieces in this scenario.  Just infantry squads and the odd support weapon.  I command fourteen squads of first line Soviet infantry led by three officers (one of which I swapped out for a 9-0 commissar).  Fire support is provided by a machine gun, two light machine guns and two actual fires spreading smoke and flames across the battlefield.


I decided on an up front defence garrisoning the buildings across the road from Dave's set up area with the bulk of my force.  I also place a couple of units on the flanks and in the rear, these were the "flee for the exit" guys while hopefully the rest of my boys could hold off the ravening Finns.  I made a slight screw up as I had forgotten that my two hidden squads could set up anywhere on the board.  Traditionally they are deep in the rear so that they can exit quickly but mine were forward bolstering the front lines. 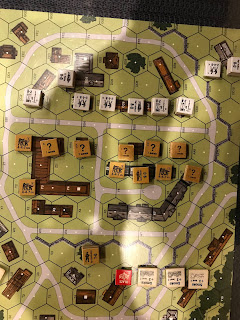 Dave had set up the bulk of his force opposite mine but also had a decent flanking force on his left (my right) which would give me headaches as my brilliant deployment hadn't given me anything to counter it.  Dave commenced by opportunity firing monstrous stacks of Finns and sending halfsquads out to bounce my concealed units.  I hate this tactic (except when I do it) as it helps to ruin my fondly imagined plans.  It didn't do Dave a lot of good though as his Finns proved incapable of shooting straight.  Nevertheless I took the hint and pulled my front liners back and shuffled forward a few concealed units in their place.


While the bulk of his force got bogged down attempting to shoot through buildings to get at my defenders he sent his flankers forward protected by stone walls and an increasing amount of smoke as the fires really took hold in the town.  I had placed a couple of squads along with a 7-0 in the rear of my set up.  These were my designated exit material but with Dave's flankers pounding through the smoke they were rapidly redesignated as delaying troops.  And delay they did.  It can't be claimed that they inflicted significant casualties on Dave's troops (I'm not sure I can claim they inflicted any casualties on Dave's troops) but they managed to pull back keeping lines of sight to the convenient open ground hexes and forcing caution on the part of their pursuers.

Over on my left he tried a little flanking as well but a hidden squad with an lmg carved up his troops as they charged boldly down the road and things settled back to the grind of fighting his way through the buildings.  Grind they did.  Slowly and painfully the Finns fought their way through my defenders, mainly by tooth and claw.  The gutters ran red with blood (and Commisar Goulashvili's hair dye) while I tried to simultaneously pull troops back to form a new defensive line and stop Dave from overwhelming the defensive line I already had.  A fortuitous close combat netted me a halfsquads worth of prisoners and I promptly raced them rearward.  This scenario is so old that the SSRs haven't yet started to say things like "prisoners do not count double".


While an increasingly frenzied series of close combats were going on in the centre the remainder of the town was rapidly catching fire and his flankers pushed forward, apparently unconcerned by the fact that the bulk of their compadres were tied up some way in the rear.  Just ahead of them my flank defenders skipped out of reach (but close enough to pose a threat) so that he couldn't just charge down the road.


Eventually Dave pushed me from the last of my forward positions and the couple of Soviet squads who had survived the carnage snuggled behind a stone wall, the last decent defensible terrain that wasn't actually burning to the ground, and waited for the end.  To my surprise my boys survived another turn behind the wall although the Finns were using their numbers to infiltrate past their flanks.  With two turns to go it was all over.  Dave counted up the distance between his most forward troops and the edge of the board and realised he couldn't make it.  My boys had skulked and scurried and, above all, survived loads of high firepower shots from the attacking Finns and had pulled off a win with time to spare.


In fairness Dave's shooting was dreadful.  He says I diced him but actually he diced himself.  My dice were average but his had apparently developed a visceral hatred of their owner.  Having said that it was only his fire shots that were poor.  Once he herded his Finns into close combat they slaughtered with a will but that's a slow way to do it when your 20+2, 16+1 prep fire stacks achieve no result whatsoever.


The smoke grimed remnants of the 131st Border Battalion stood to attention as General Slugabed stumbled up to them reeking of vodka and waving medals.  His largely incoherent speech of praise was punctuated by hiccoughs and one awkward vomiting fit.  Nevertheless with the assistance of his aides the general managed to pin medals onto the newly minted heroes with only a couple of fatalities.  With the ceremony over the newly decorated survivors reported to the makeshift field gulag Commissar Goulashvili had set up on the charred remains of the bakery.  After all there was always the possibility a few crumbs had survived.
Posted by Neil at 3:31 AM 2 comments: